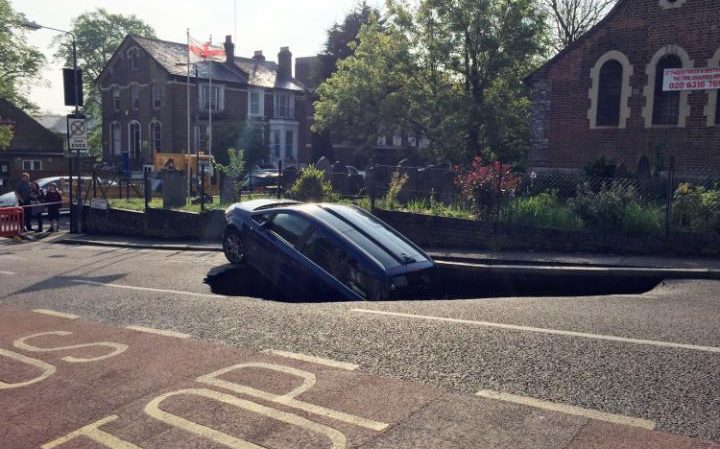 Residents are said to fear for their safety after engineers said that a Greenwich sink-hole could represent some kind of portal to an alternative universe replete with chaos and hideous life-forms - or "North London" as it is sometimes known.

Although many locals expressed fear of the mysterious worm-hole in their midst, and the terrifying passage to a nightmare world that it offered, others were more pragmatic. "A rift in the fabric of space-time may not be the most conventional form of transit, but it probably offers a more reliable method of transportation than SouthEastern trains," one woman told us. "And it certainly beats waiting for them to extend the fucking Bakerloo line," she added.

The road collapse in Woodland Terrace followed a night of heavy rain in the SE10 area. Police warned of the risk of similar incidents in other parts of South East London, particularly Peckham, where residents feared that any hole could quickly be hijacked by hipsters setting up some kind of pop-up bullshit.

Meanwhile, some speculated that the sink-hole could represent divine retribution for hubris, following Greenwich's elevation to "Royal Borough" status in 2012. "They got above themselves," New Cross resident Dave Amersham-Arms told us. "Let's face it - Greenwich is just Deptford with a Pizza Express and more twats."